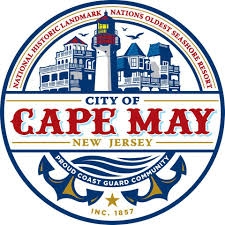 Cape May, a sprawling beach-front community looks much the same as it did when it was the summer White House for several presidents and John Phillips Sousa entertained with his famous march tunes during summer evening concerts.

Cape May is a National Historic Landmark, the little NJ seaside town is filled with dozens of restored Victorian buildings, as ornate outside as inside, that are open to the public for tours. The Emlen Physick Estate on Washington Street, a restored Victorian home of the 1880s, is Cape May’s Victorian House Museum and tours -- walking, trolley and carriage -- give visitors a glimpse of life in this resort more than a century ago.

Ocean breezes keep Cape May NJ cool through the summer and the beach is never more than a few minutes from almost anywhere in town. Bike riding is a great way to get aroundand see many of the splendid houses and gardens tucked away on side streets. Professional theater, the annual Music Festival and a wealth of other cultural events add to the town’s popularity.

The Mid-Atlantic Center for the Arts hosts  Cape May's popular 10-day Victorian Week every October and throughout the year the Tulip Festival, Food and Wine weekends and an ever- growing list of special events attract thousands of people to Cape May to enjoy these events and the ambiance of this quaint little NJ town. Christmas time in Cape May is a six-week celebration of candlelight tours, carolers on their musical rounds, concerts, shopping and plenty of Yuletide cheer, including a Dickens Extravaganza in December.

Cape May's many Ocean-front hotels, beautifully decorated bed and breakfast inns and luxurious guest houses provide the best in accommodations and the town has become well-known for its many award-winning gourmet restaurants, with The New York Times calling Cape May "the restaurant capital of NJ."

By automobile, Cape May's south on the Parkway to Exit 0; but for the boater, it’s the Cape May Harbor. Either way, you’ll find yourself in the Nation’s First Resort. Considered by many to be New Jersey’s Sport fishing capital, the resort has become a destination of choice for boaters and tourists from April through Christmas, making it truly a three-season-resort.

Located approximately half way between New York and Annapolis, Cape May’s safe, easily accessed all-weather harbor with its well appointed marina’s is a convenient stop-over for many boaters and a welcomed sanctuary for others. The harbor itself is situated at the intersection of the Intracoastal Waterway, Cape May Inlet and Delaware Canal; a 641’ Loran tower just north of the Inlet provides an excellent visual cue. The east or ocean side of Cape May harbor is dominated by The Coast Guard’s NJ training center, while commercial fisheries, a cannery and several marinas’ occupy the western bank.

Two premier facilities, The Canyon Club Marina – just north of the mouth to the canal, and South Jersey Marina – inside the harbor on Schellenger Creek, serve as the hosts to a busy NJ sport fishing tournament schedule.

Commencing with a Spring Striper Tournament in May, the season concludes with the Big Bass Open in November. During the six months in between, world class sports fishermen from far and wide depart from our docks in pursuit of tuna, shark and marlin. The season’s most prestigious event, the Mid-Atlantic $500,000, is the sport’s richest tournament with total 2004 prize money approaching $1,500,00.00.

Fishing is but one of Cape May's many attractions. South Jersey Marina has recently reorganized its docking facilities in order to accommodate cruising rendezvous, yacht clubs and other guests not necessarily interested in fishing, and for good reason, there is so much more to do. Architecture, the arts, golf, history, beaches and dining, Cape May and its surrounding region have much to offer to the week or weekend visitor, and there is no better way to visit than by boat.

Cape May NJ has evolved from a tiny whaling village to a premier resort community, without sacrificing an ounce of charm. Our history is our future and both are valuable entities. In the view from the harbor, it seems somehow fitting that this evolution has returned to Cape May a reputation both as a boating destination and NJ sport fishing capital.